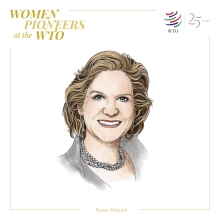 The World Trade Organization (WTO) recently recognized former dean of the School of Public Policy and professor emerita Ambassador Susan Schwab in its series of Women Pioneers at WTO. The project is part of the organization’s 25th Anniversary celebration.

This award recognizes distinguished women for their work at WTO and their contributions to international trade.

“My relationship with the World Trade Organization goes back to before the WTO. I started my career right out of graduate school… and my career as a practitioner concluded as the USTR” said Amb. Schwab. “It was great fun, a lot of work, and well worth the while.”

Amb.Schwab is, as of date, the only female United States Trade Representative to participate in the WTO’s Doha Round, where she negotiated with major international economic powers, including the European Union, China, India, Brazil and Indonesia. Her work leading critical negotiations has significantly shaped trade policy.

“For any young women out there who might be thinking of careers in trade policy, trade politics, or trade negotiations, I would say go for it! It’s a great field for women” said Amb. Schwab. “All sorts of backgrounds come together in international trade and negotiations, and it is fascinating.”

Amb. Schwab became the US Trade Representative in 2006 and was a key member of the president's cabinet. In her role, she was the president's lead trade strategist and advisor and participated in the Doha Round of WTO negotiations. She also successfully negotiated several other agreements, including launching the initial TransPacific Partnership negotiations.

Before her tenure as US Trade Representative, she served as the dean of Public Policy from 1995 through 2003. Schwab received her BA from Williams College, a master’s degree from Stanford University and a Ph.D. from The George Washington University.