Spotlight on Faculty and Staff for Convocation

Globally renowned scholars, life-changing instructors and staffers doing vital behind-the-scenes work are among the 26 members of the UMD community who will be honored for their service and contributions during the 38th annual Convocation today, including Nancy Gallagher, research professor in the School of Public Policy and director of the Center for International and Security Studies at Maryland (CISSM).

The event returns this year to its traditional setting in Memorial Chapel, scheduled at 2 p.m., after the pandemic drove last year’s celebration online.

Gallagher has established herself as a leading voice in international security and arms control.

Her current work focuses on three critical areas: improving cybersecurity decision-making, cooperative strategies to reduce nuclear risks and public opinion surveys about security policy in the United States and Iran. Those polls are often the only publicly available insight into Iranian domestic opinion and have been cited by U.S policymakers across political parties. 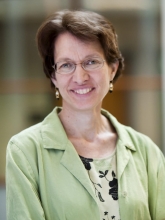 “She has been simultaneously solid and bold in her research and conclusions on a controversial subject, introducing much-needed grounding and empirical analysis into the political and policy debates,” says Robert C. Orr, School of Public Policy dean.

Gallagher, who earned her master’s and Ph.D. in political science from the University of Illinois at Urbana-Champaign, worked as executive director of the Clinton administration’s Comprehensive Test Ban Treaty Task Force before joining UMD as a senior research scholar and associate director for research at CISSM in 2001. She became its director in 2017.

Currently at work on a two-book series, “Strategic Logics for Arms Control,” she has been published more than 50 times on topics including control of dangerous pathogens, space security and Chinese perspectives on arms control and strategic stability. She has given dozens of public presentations and appeared on NPR and the BBC.

Gallagher has earned numerous accolades throughout her UMD career, including the university’s first Research Communicator Impact Award in 2015, the Outstanding Invention award in 2016 and the Dean’s Award for Excellence in Research, Teaching and Service in 2018.

“She is a strong center director, with a passion for tackling difficult security questions with creative approaches,” says Charles Harry, associate research professor in the School of Public Policy, “and has cultivated a strong community of young researchers through effective teaching and mentoring.”